Tell Them Your Story

Thank Them With Your Video Message

Register To Submit Your Video Message

On November 14, 1960, four six-year-old girls (Leona Tate, Ruby Bridges, Tessie Prevost and Gail Etienne) became the first African Americans to desegregate formerly white only elementary schools in New Orleans and the Deep South. As part of the 61st Anniversary of Desegregation celebration, we launched the Because Of You I AM video message awareness social media campaign with a Call To Action.  This campaign will feature video messages of gratitude, congratulations and inspiring personal testimonies dedicated to Civil Rights Pioneers The New Orleans Four. Be a part of celebrating our beloved living treasures who paved the way and CHANGED America forever.

Because of You I AM 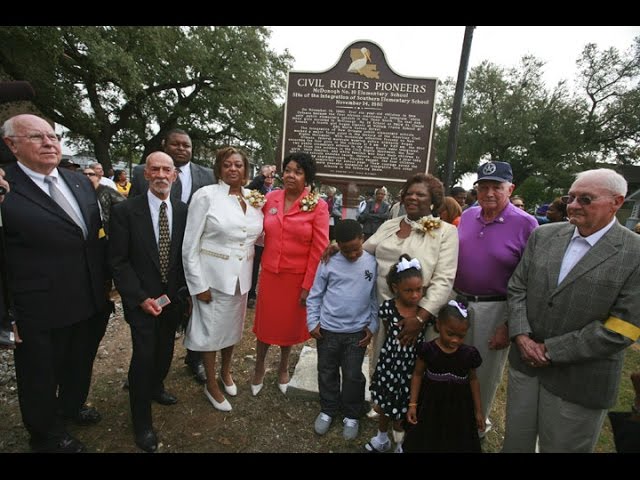 Because of You I AM

Half-century ago, first-graders Leona Tate, Tessie Prevost and Gail Etienne had McDonogh 19 to themselves for an entire year, thanks to a...
Because of You I AM

Civil Rights Pioneers Leona Tate, Gail Etienne and Tessie Prevost continuing the work for the new Civil Rights Center in the Lower Ninth...
Because of You I AM

Ruby Bridges Statue was dedicated on November 14th, 2014, in the courtyard of William Frantz Elementary School. Place Category: Memorial...
Because of You I AM

Desegregation Pioneers Reunited with US Marshals

At 9 a.m. -- the exact time that "The McDonogh 3" integrated the school 50 years ago -- three women and the federal marshals who once...
Because of You I AM

Civil Rights Pioneer Thanks US Marshal

Woman who was escorted into school as one of the first black students, age 6, offers thanks 53 years later to the white U.S. Marshal who...
Read All News

Get The Toolkits You Need To Organize In Your Community